(SL) – This article by Ed Pilkington for The Guardian highlights all of the details you need to know about Meek Mills recent sentence and the judge being accused of having a particular interest in him:

Behind those blunt words lies a story that has exposed a running sore within the US criminal justice system. The incarceration of Williams for minor probation violations related to a crime he committed as a teenager more than a decade ago has brought some of the biggest names in music and sport rallying to his cause, spawned a new hashtag and drawn hundreds of people to the steps of Philadelphia’s City Hall to protest. 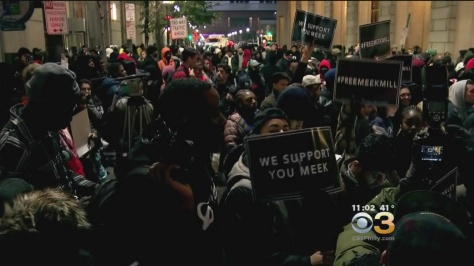 From Jay-Z to Colin Kaepernick, influential supporters have spoken out against the perceived mistreatment of Williams and what it tells us about the experiences of a generation of African Americans. The outpouring has lifted the lid on a largely overlooked iniquity, in much the same way as the unmasking of Harvey Weinstein has laid bare the sexual misconduct of powerful men.