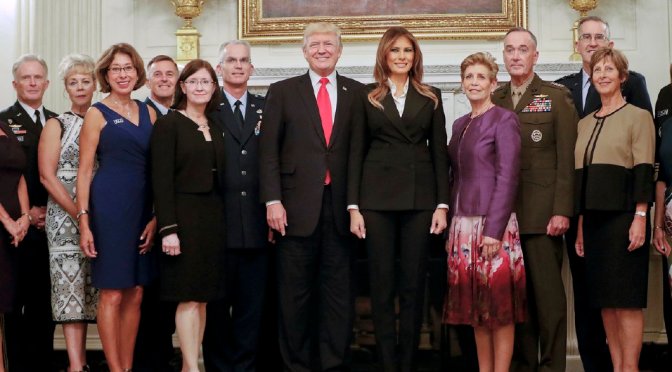 (SL) – The theatrics continue with Donald Trump.  #45 is stirring a firestorm of speculation with his “calm before the storm” remark. When asked about the comment at a White House photo-op today, Trump winked and said, “You’ll find out.”

He made the “calm before the storm” remark in an event with military officials last evening.  Later, at a White House briefing, Press Secretary Sarah Huckabee Sanders said she’s not aware of anything specific that was in the remark.  She batted away numerous efforts by reporters to link the comment to North Korea or Iran.

The New York Times Reports, the episode raised questions about whether the Trump administration was planning some kind of military action. For weeks, Mr. Trump has been promising to respond to any North Korean aggression toward the United States.

But it was equally plausible that the president was merely being theatrical, using the backdrop of senior military leaders, bedecked with medals and ribbons, to stir up some mischief. Mr. Trump grinned as he spoke, while the commanders stood next to him stoically. Several aides said afterward they had no idea to what he was referring.

Mr. Trump has made a point of saying that he will not telegraph military operations, in the Middle East or East Asia.

The president also faces an Oct. 15 deadline to recertify a nuclear weapons deal with Iran, which was negotiated under former President Barack Obama. The president is expected to decline to recertify the agreement, which would essentially allow Congress to decide whether to reimpose economic sanctions.

Backing out of this deal could cause problems with other world powers who are party to it, at a tense time with another nation aspiring to build nuclear weapons: North Korea.

In his remarks to senior military leaders before the dinner, Mr. Trump outlined the challenges facing the United States.

“We have had challenges that we really should have taken care of a long time ago, like North Korea, Iran, Afghanistan, ISIS and the revisionist powers that threaten our interests all around the world,” Mr. Trump said, using the acronym for the Islamic State. “Tremendous progress has been made with respect to ISIS, and I guess the media is going to be finding out about that over the next short period of time.”