It dropped about 130 pounds of methamphetamine and a getaway bicycle before flying back into Mexico. The drugs, valued at around one-point-four million, were seized, and two people were arrested on suspicion they were there to pick up the drugs.

(SL) – When Icon Whitney Houston’s daughter Bobbi Kristina died in 2015 many around her believed that her boyfriend at the time, Nick Gordon, had something to do with it. Reports of abuse and 911 calls confirmed that Bobbie Kristina had been abused by Gordon several times.

The autopsy report also showed wounds believed to have been caused by Gordon. After her death, Bobby Brown slapped Gordon with a wrongful death civil suit in which he won after Nick refused to show up. Brown’s estate said in a statement that Fulton County Superior Court Judge T. Jackson Bedford awarded $36,250,000 in damages .

Gordon was not present in court and has not been criminally charged in Brown’s death.

OLD habits remain as the 28- year old was arrested again for attacking his girlfriend Laura Leal.

Gordon was taken into custody by the Seminole County Sheriff’s Office in the early hours of Saturday morning following an incident with his girlfriend Laura Leal.

According to reports, officers were called to Gordon’s home for a possible disturbance and found 26-year-old Leal with a bloody swollen bottom lip.

Leal told authorities she had picked the 28-year-old up from a bar and was driving him home when he punched her in her right cheek several times and pulled her hair.

In response, Gordon told the cops that both of them had been drinking and after Leal ripped his shirt and threw a bottle at him, he just wanted her to leave the home. He claims she attacked him for no reason and that she is ‘crazy’.  Even though Leal refused medical treatment and declined to press charges, Gordon was arrested anyway based on Leal’s injuries and her statement.

Gordon was arrested for battery domestic violence and later released on a $500 bond. He’s due in court on April 6th.

If you remember, Gordon was previously arrested  in June of last year for for allegedly kidnapping and beating his girlfriend for six hours. She later withdrew the charges and petitioned to have the case dismissed saying she was the aggressor.

We all know where this is headed. 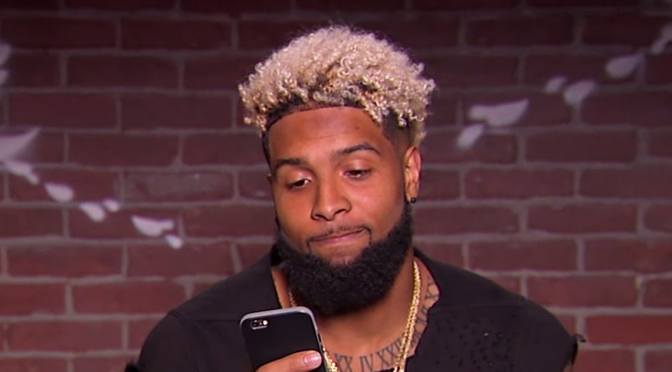 (SL) – A video featuring an Odell Beckham lookalike has the internet buzzing. Whether or not it is in fact the Giants star or someone else or if the video is current is up for debate but if it is him, it’s not a good look.

In the short clip, Odell Beckham is seen laying in bed next to a pizza holding what appears to be a blunt or marijuana cigarette. Not too exciting right? The female next to him is what makes the video inappropriate and potentially costly for the baller. She’s holding a card and lining up a white substance that many think is cocaine. The wide receiver has been laying low in the off season while he reportedly attempts to negotiate a new deal.  Rumor has it that he’s hoping to up his pay to $20 million per year. He’s currently on a $8.5 million deal after New York picked up the fifth-year option on his rookie contract.

Beckham has been on a Nike-sponsored trip to Europe.  A Giants spokesperson says, “We’re aware of the video, but we don’t have any comment beyond that.”

Some say the NFL could step in with a suspension for violating the league’s substance abuse policy. But…that’s assuming your assumptions are correct in that it’s him in the video and that it’s marijuana in the blunt like cigarette. To be continued…

(SL) – Is it that deep? Let it go for 9 months. There’s a staggering number of women that continue to roll the dice with their babies’ health by smoking weed while they are pregnant.

There are no benefits. I repeat, no benefits in smoking weed while you’re pregnant.

A study just published in JAMA found that marijuana use among pregnant women in Kaiser Permanente Northern California has been rising substantially. 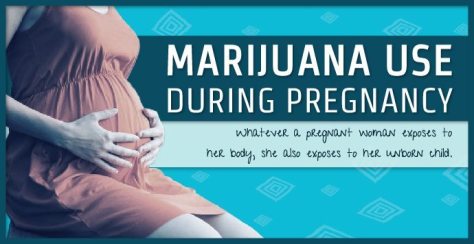 For the study, Kaiser Permanente researchers (Kelly C. Young-Wolff, PhD, MPH, Lue-Yen Tucker, Stacey Alexeeff, PhD, Mary Anne Armstrong, Amy Conway, MPH, Constance Weisner, DrPH, and Nancy Goler, MD) analyzed questionnaire answers and laboratory results from 279, 457 pregnant women over an 8 year period. They found that from 2009 to 2016, marijuana use rose from 4.2% to 7.1% for all pregnant women. The jump was significantly greater for those under 25 years old with the numbers going from 12.5% to 21.8% among those under age 18 and 9.8% to 19.0% among those 18 to 24 years old.

No word yet on exactly why these women are still getting high while carrying a child but most feel that it could be in part to get rid of morning sickness, aches and pains.  NBC 2 News  did a report on the increase of marijuana use for morning sickness but, I repeat, this is no approved use of marijuana, no medical use, nothing.

(Washington, DC) — The White House is denying a report that President Trump used demeaning language about immigrants in a meeting with top administration officials.

The “New York Times” wrote that in a June meeting, Trump said that people coming to America from Haiti “all have AIDS,” and that Nigerian immigrants would never, quote , “go back to their huts.”

White House press secretary Sarah Sanders issued a statement denying Trump made the comments and blasting the newspaper. She said others in the meeting, including Secretary of State Rex Tillerson and then Homeland Security Secretary John Kelly all deny the “outrageous claims.”

She accused the “New York Times” of printing lies from anonymous sources.

“Unfortunately, it is all too believable that this is how our president speaks behind closed doors because his very public policies have been driven by racism and hatred since Day 1. From his xenophobic Muslim ban to his cruel and immoral treatment of immigrant dreamers, this merely adds crass words to the racist policies this administration has been pushing for a year.

“President Trump is mentally incapable of imagining the humanity of anyone who looks different from him or hails from a different nation,” Tometi added. “This is perhaps nowhere more true than of his treatment of black immigrants

Other accounts claim the arrest was part of a Wednesday night disturbance that resulted in damage to five Los Angeles Police Department vehicles and one sheriff’s vehicle.

According to the police report, Randolph was arrested at 11 p.m. PT, booked at 4:23 a.m. and released Thursday morning as bail was set at $20,000. His next court date is scheduled for Aug. 31, according to sheriff’s department’s online records.

Randolph’s agent and attorney Raymond Brothers said Thursday that the charges are false and misleading and that they are looking at options to resolve the matter.

LAPD officials told ABC-7 that officers were on routine patrol when they encountered a group drinking alcohol, smoking marijuana and playing loud music while blocking a street at the Nickerson Gardens project in Watts. The officers then tried to disperse the crowd, and the disturbance escalated.

The 6-foot-9 free agent signed a two-year, $24 million deal with the Kings in July.

A friend of Randolph’s faced a marijuana rap in 2010 after Indianapolis police found him driving Randolph’s sport utility vehicle with a cooler containing marijuana in it. Randolph maintained he was not involved and he was never charged.

(SL)- In what seems to be ripped  straight from a TV show or crime movie, seven police officers in Baltimore Maryland are accused of writing the script for the real life wire.

Accused of everything from robbery to selling heroin are:

All have been federally indicted for a racketeering conspiracy.

The investigation lasted over a year and the criminal acts range from stopping innocent people and robbing them for amounts ranging from $200,000 to a ‘couple hundred dollars,’ filing false affidavits, and making fraudulent overtime claims while officers vacationed in Myrtle Beach and gambled at casinos.

In September 2016, Gondo was recorded telling Rayam he had switched off his body camera before hitting a cellphone out of a woman’s hand.

“I turned the camera off,” Gondo said.

“These officers are 1930s-style gangers,” said Police Commissioner Kevin Davis. “They betrayed the trust we’re trying to build with our community at a very sensitive time in our history.”

U.S. Attorney Rod Rosenstein also announced a second indictment charging a drug conspiracy. Sometimes, narcotics and weapons were seized in addition to money and, “in several instances, the defendants did not file any police reports,” the indictment alleges. 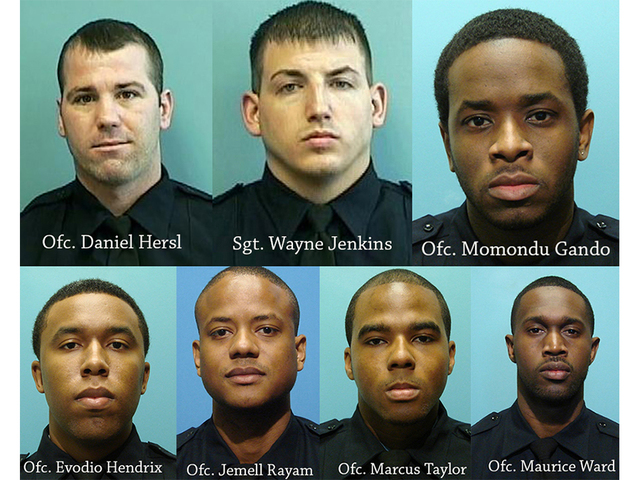 In it, Gondo is accused of dealing drugs and protecting his operation by tipping off drug dealers about law-enforcement tactics.

“This is not about aggressive policing, it is about criminal conspiracy,” Rosenstein said.

In August 2016, Justice Department’s released a scathing report detailing systemic failures, including excessive use of force, illegal stops, inadequate oversight and a dearth of training.

By then, federal agents had spent months following officers assigned to the Gun Trace Task Force, a squad formed to reduce violent crime by tracking and removing illegal guns from the streets.

The indictment describes a criminal enterprise that began in 2015, when the city was rocked by civil unrest following the death of a young black man, Freddie Gray, in police custody that April. Weeks later, the Justice Department began a “pattern and practice” investigation of the city’s police force. Intense reform efforts followed, including the expanded use of cameras to record police interactions. Rosenstein said the investigation began about a year ago, and that as a result, his office “quietly dropped” five federal cases brought by one or more of the officers.  Baltimore State’s Attorney Marilyn Mosby wasn’t notified about the investigation until charges were filed. He expects her office to review its cases involving the officers, as well.

All have been suspended without pay and are in custody of the FBI as police are search for more victims who may have interacted with any of these officers under suspicious circumstances. 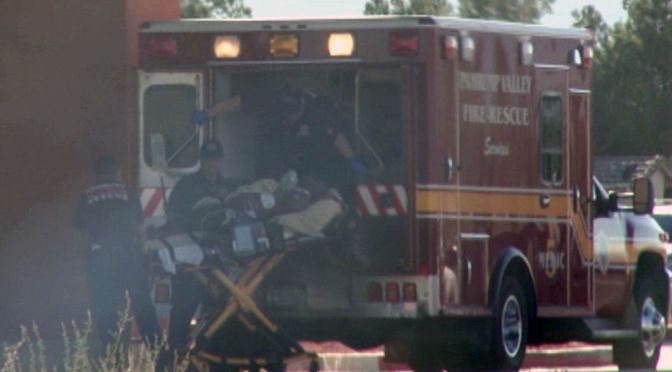 (Daily Mail) – Since awakening from a three-day coma, Lamar Odom’s health has been making a steady improvement.

The former LA Lakers star, for the first time, could socialize and move around, and is ‘heading in the right direction,’ E! News reported.

The brothel where Lamar Odom almost died.According to the Los Angeles Times, Odom was ‘conversational,’ able to speak sentences and send text messages. The Times also reported that a spokeswoman for Odom’s aunt also said that he was improving, as he is able to breath on his own.

The 35-year-old was also helped out of his bed and onto a chair and also passed a  critical swallow test, E! News reported.

However, most of the athlete’s communication comes through a simple thumbs-up or thumbs-down, E! News reported. A source close to the situation told E! News: ‘This is great progress but there is always the possibility for setbacks.’

Odom was taken off a ventilator on Friday night after he collapsed on Tuesday during a drink and drug-fueled binge in a Nevada brothel.

Previously, reports claimed four of his organs – including his kidneys – were failing and that doctors were losing hope for him the longer he was in a coma.