(SL)  – A researcher says Aaron Hernandez suffered the most severe case of CTE she’s evediscovered in a person his age, damage that would have significantly impacted his decision-making, judgment and cognition.

Dr. Ann McKee, the head of the CTE Center at Boston University, called Hernandez’s brain “one of the most significant contributions to our work” because of its pristine condition. Doctors diagnosed Hernandez with Stage 3 CTE, which researchers hadnever seen in a brain younger than 46 years old, McKee said.
His brain had significant damage to the front lobe, which impacts a person’s ability to make decisions and moderate behavior.
The Daily Mail reports, Chronic traumatic encephalopathy (CTE) is a degenerative brain disease that is caused by repeated hits to the head.  Over time, these hard impacts result in confusion, depression, dementia, explosiveness, aggression, and suicidal thoughts.

Researchers are still unclear on how CTE affects behavior, but a growing swell of studies is offering some answers.
The disgraced star had a $41 million NFL contract when he was arrested at his home in June 2013 and charged with the murder of a semi-pro football player Odin Lloyd. 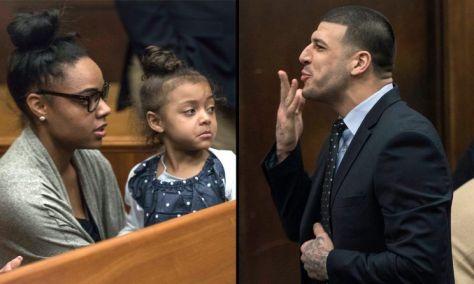 Lloyd was the boyfriend of Hernandez’s fiancee’s sister. He was found dead in an industrial park on June 17, 2013, riddled with bullets. Surveillance footage showed Hernandez at the scene an hour before, then arriving at home minutes after gunshots were fired.
In April 2015, Hernandez was convicted of first-degree murder, and sentenced to life in prison. While in prison, Hernandez was charged with another killing – a double murder committed by a drive-by shooting. But in April this year, he was acquitted of both charges.  The next day, he took his own life.
His family has since filed a lawsuit against the NFL and the Patriots on behalf of Hernandez’s four-year-old daughter Avielle, claiming the club and the league knew about the connections between football and CTE long before Hernandez was drafted.