(SL) – More details have been released about the ambush that claimed the lives of four soldiers in Niger.

The men had been out on a routine intelligence gathering mission when they were suddenly given the new order and embarked on it, venturing into dangerous territory with no increase in manpower, ammunition or weapons.

Shortly after 11am on October 3, they came under fire from 50 ISIS militants who were hiding behind trees on either side of a road near the remote village of Tongo Tongo which the soldiers had just left.

On Friday, a US official gave the fullest account yet of how the attack, which has been shrouded in secrecy and described murkily by US officials in Washington, played out.

Speaking to ABC News, the unnamed official added their belief that the men’s ‘light convoy’ had been being surveilled by their killers for at least a day before they were hit.

Questions remain over why top command sent the unit – which consisted of just six to eight vehicles and only 42 troops – into the dangerous area to gather intelligence on a target.

The official, speaking on the condition of anonymity, said had the men been called back after the original reconnaissance mission then they would still all be alive.

‘ They should have been up and back in a day. They were hit because they were up there so f****** long on a mission that morphed, they were spotted, surveilled and ultimately hit.’

The decision to keep the convoy out in the field also drew criticism from Nigerian forces.

One soldier spoke to CNN to say he was shocked when he arrived at the site of the ambush as back-up later to discover the circumstances the men faced.

He explained that for a mission of such risk, his men usually traveled in units of 80-100 soldiers, more than half the number which came under unrelenting fire.

They also told how when French fighter jets arrived, the militants escaped by setting fire to the trees which they had hid behind in order to create a smoke-screen.

It blinded the French pilots, making it impossible for them to spot where their allies were on the ground versus the enemy.

By the time the French were able to land, they found surviving troops, many of whom were injured, still poised for battle.

‘I admired their bravery, they were ready to fight until the end,’ the Nigerien soldier said as he explained that they were stood back-to-back to protect one another as they fired shots.

The aforementioned US official said it was the French soldiers who stopped all of the soldiers from being killed.

‘The French saved our men. Yes, we lost four. But we would have lost everybody if it wasn’t for the French,’ he said.

A survivor previously recalled feeling as though ‘something was off’ in the moments before the unit came under fire.

The unit had been out on a routine reconnaissance mission when they suddenly got a new mission – to locate the shadow ISIS figure and capture or kill them. 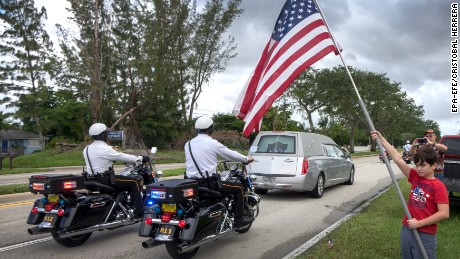 They searched through the night for on October 2 then, on October 3, stopped in Tongo Tongo which is known to have links to the terror group.

The soldier said that after meeting the village chief, he tried to stop them from leaving.

Moments before they did finally make their exit, a motorbike dramatically sped out of the town and raised their suspicion something was amiss. As their convoy drove down the street, the militants, who were perfectly spaced apart, pounded them with rocket-propelled grenades and machine guns.

Until Friday, it was thought that all of four of the American men were trapped in the kill zone immediately. It was not clear that Johnson in fact escaped it but went back to save his comrades and died in the process.

One surviving soldier had described how he grabbed ‘every weapon available to him’ to fight off the terrorists. He described Johnson as a ‘beast’. It had also been claimed that during the mission, the men were not dressed for battle and were wearing t-shirts and baseball caps.

‘I was surprised that the Americans would go out into the zone with such a light convoy and no air cover, no drones to keep watch over them,’ the same Nigerien soldier told CNN.

What still remains unclear is why US forces waited for more than an hour to call for help. Within minutes of their first request, a drone was overhead.

US officials previously suggested that the unit may have thought they had the situation under control themselves and that they didn’t see the need for back-up until an hour into the ambush.

French Mirage jets arrived an hour after the drone and began evacuating the injured then retrieving bodies once the fire had stopped.

Sgt. La.’s body was not found until October 6. His grieving pregnant widow appeared on Good Morning America this week to say she still had no idea how he met his end in battle.

‘I don’t know how he got killed, where he got killed, anything,’ she told ABC News. ‘That’s what I’ve been trying to find out since day one,’ she said.

The disastrous mission has gained even thrust further into the spotlight because of the disputed condolence call President Trump made to Mrs. Johnson after her husband’s death which was criticized by Democrats.

Trump has defended it repeatedly, insisting he was ‘very nice’ to the pregnant widow.

Questions which must now be answered include whether the men should ever have been told to proceed with the mission with no surveillance, no back-up and limited weaponry and ammunition.

It has also shed light on the US military’s presence in Africa which was largely unrecognized until recently.

U.S. forces have been in the country intermittently for more than two decades. Currently, some 800 U.S. service members are supporting a French-led mission to defeat the Islamic State, al-Qaeda and Boko Haram in West Africa.

One thought on “Hero Green Beret Sgt. La David Johnson Had Escaped Kill Zone But Went Back To Help Comrades After Call For Unplanned Mission And NO Backup”