(SL) – There’s something very off about the death of former NFL player Aaron Hernandez.

The body of the ex-pro reportedly did not contain any traces of drugs, according to toxicology reports.

After Hernandez’s body was found hanging from a sheet in his cell at Souza Baranowski Correctional Center in Shirley, Massachusetts earlier this month, authorities ruled it out as a suicide. Claims soon surfaced that he could’ve smoked synthetic marijuana before allegedly killing himself, but those reports have been refuted. 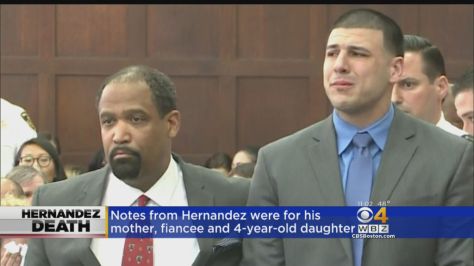 The toxicology results came around the same time Hernandez’s close jailhouse friend and alleged lover Kyle Kennedy said he would not be surprised if the synthetic drug played some part in his death, according to the Boston Herald.  And speaking of Kennedy, none of the letters released have indicated that there was anything outside of a friendship going on between the two.

Kennedy is serving 3-5 years for armed robbery. Hernandez reportedly requested to be housed with Kennedy in his cell, but was denied. That’s no indication that anything was going on between the two. A lot of prisoners complain about not having a cellmate in isolation.

Hernandez  reportedly wrote suicide notes to his fiancee, daughter, and Kennedy, who allegedly was put on suicide watch after his death. It’s being reported that the notes were tucked next to a Bible that was opened to verse 3:16 – the words of which were also written on his forehead in red ink.

The Daily Mail reports, it has been speculated that Hernandez’s sexual orientation may have been a motive for the murder of Odin Loyd, for which he was imprisoned. In April 2015, Hernandez was convicted for shooting and killing Lloyd, a semi-professional football player, on June 17, 2013.

Lloyd may have known that Hernandez was carrying on an affair with a male friend who was forced to testify before the grand jury in the Lloyd case.

Five days before he died, he had been acquitted in a double-murder. His death came on the same day his former teammates visited the White House after winning their fifth Super Bowl.

There are also reports that a civil fight could be brewing with family members of the victims wanting to cash in on a portion of the estimated 3.5 million that could be released to his estate from the NFL.  However, currently the estate is valued at $0.