(SL)- Donald Trump’s administration continues to mislead people with yet a new lie, this time about President Obama. The latest twitter rant accused the former POTUS of tapping his phone which is utterly ridiculous and unsubstantiated.

Trump, as he normally does, is basing his concerns off of a Breitbart article circulating that claims President Obama tapped his phones at Trump Tower before the election in a Nixon/Watergate style scandal.

The Executive office can not do this on its own. His claim is baseless and if there was a wire on his phone FISA (The Foreign Intelligence Surveillance ) would have ordered it and there would be proof of it. Trump hasn’t provided any evidence but fired off these words early Saturday morning.

A spokesman for Mr. Obama says any suggestion that the former president ordered such surveillance was “simply false.”

The New York Times reports, Mr. Trump’s aides declined to clarify whether the president’s explosive allegations were based on briefings from intelligence or law enforcement officials — which could mean that Mr. Trump was revealing previously unknown details about an investigation — or on something else, like a news report.

His decision to lend the power of his office to such a charged claim against his predecessor — without offering any initial proof — was remarkable, even for a leader who has repeatedly shown himself willing to make assertions that are false or based on dubious sources.

It would have been difficult for federal agents, working within the law, to obtain a wiretap order to target Mr. Trump’s phone conversations. It would have meant that the Justice Department had gathered sufficient evidence to persuade a federal judge that there was probable cause to believe he had committed a serious crime or was an agent of a foreign power, depending on whether it was a criminal investigation or a foreign intelligence one.

Former officials pointed to longstanding laws and procedures intended to ensure that presidents cannot wiretap a rival for political purposes.

But a senior White House official said that Donald F. McGahn II, the president’s chief counsel, was working on Saturday to secure access to what Mr. McGahn believed was an order issued by the Foreign Intelligence Surveillance Court authorizing some form of surveillance related to Mr. Trump and his associates.

The official offered no evidence to support the notion that such an order exists. If one does, it would be highly unusual for a White House to order the Justice Department to turn over such an investigative document, given the traditional independence of law enforcement matters.

Russia is materially benefiting from Trump’s administration and if Donald would ever release his tax records it’s highly likely that business dealings with Russia and possible loans from banks in Russia will appear.

Jeff Sessions met with the Russian Ambassador twice after saying that he didn’t and has recused himself from further investigation about the Russians.

Mike Flynn was fired for his connection to the Russians and The House and Senate Intelligence Committees are moving forward with their own investigations into Russia’s efforts to influence the election, and they have said they will examine links between Mr. Trump’s associates and the Russians.

Senator Chris Coons, Democrat of Delaware, said on Friday that he believed there were “transcripts” that would help document those contacts, though he said he had not yet seen them. 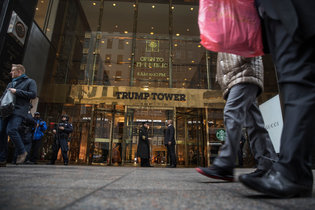 “There are transcripts that provide very helpful, very critical insights into whether or not Russian intelligence or senior Russian political leaders — including Vladimir Putin — were cooperating, were colluding, with the Trump campaign at the highest levels to influence the outcome of our election,” Mr. Coons told Andrea Mitchell on MSNBC. “I believe they exist.”

In a written statement on Saturday, a spokesman for Mr. Coons said that the senator “did not imply that he is aware of transcripts indicating collusion between the Trump campaign and the Russians.” The spokesman, Sean Coit, said Mr. Coons “simply stated that a full review of all relevant transcripts and intelligence intercepts is necessary to determine if collusion took place.”

The crazy thing is, Trump is so impulsive he doesn’t realize that if his phone was tapped it means a FISA warrant was issued because a Federal Judge found probable cause for surveillance and that could be the end of him!