(SI) – He almost got away with it, but there was only one problem.  57- yer old Joaquin ‘El Chapo’ Guzman Loera, the world’s most wanted man and Mexican Cartel Leader wanted the world to know his story. El Chapo is the biggest drug lord in history. A multi billionaire that admits to supplying more heroin, methamphetamine, cocaine and marijuana than anybody else in the world.

In an article written by Sean Penn for Rolling Stone, Chapo says, ” I have a fleet of submarines, airplanes, trucks and boats.”   As a matter of fact he sent engineers to Germany to learn how to build the tunnel he  used to escape a maximum security prison.

That was 6 months ago and up until now avoiding capture is something he seemed quite skilled at. But the idea of a movie detailing his captivating life would ultimately lead to the end of the fugitive lifestyle that led him out of his spacious mansions and into the confines of a condo/hotel that he shared with his wife and children.

Who is El Chapo? Up until now he called himself a farmer but the world knows that he is the head of the Sinaloa Cowboys – Mexico’s most dominant drug cartel.  His organization smuggles multi-ton concaine shipments from Colombia through Mexico and into the United States by air, sea and road.  He has distribution cells in the U.S. and drug exports in Southeast Asia.

Why do they call him El Chapo?  Because he is only 5’6. It’s a spanish nickname for ‘shorty’.

Murderer? El Chapo allegedly has claimed to have directly  or indirectly caused the deaths of thousands of people.  The Sinaloa cartel is known to be the most ruthless crime organization in Mexico. He will reportedly face  federal charges involving money laundering, kidnapping, drugs distribution and violence.

On The Run – El Chapo was jailed in 2001 but managed to escape reportedly with the help of paid guards through either a laundry cart or dressing as a woman. After 13 years on the lam he was finally arrested in Feb. 2014 but managed to break out of a maximum security prison in July  2015, through a secret shower hatch that led to a 1-mile tunnel that had been built leading from his cell to a piece of property outside of prison grounds. His escape was elaborate with lighting, ventilation ducts and a waiting motorcycle. 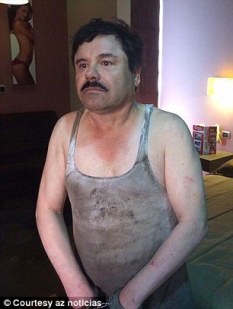 On Friday, the cartel boss was captured in a daring 4am raid by Mexican marines and was returned to Altiplano jail. The double Oscar-winning actor Sean Penn’s meeting with El Chapo led to the gun battle in which he was captured in Los Mochis Township, Sinaloa, Mexico.

Mexican actress Kate del Castillo who befriended El Chapo through social media and letter correspondence when he was incarcerated, brokered the deal for Sean Penn to interview El Chapo Guzmán who wanted to make a film about his life.  During a visit to Los Angeles, del Castillo met Penn through mutual friends and discussed El Chapo’s idea for a film and arranged for them to meet.

The sensational meeting took place deep in the Mexican jungle in October and was arranged by Penn, Mexican actress Kate del Castillo and a fixer, with the permission of the Sinaloa cartel.

The U.S. has filed at least seven extradition requests in six different states for Joaquin ‘El Chapo’ Guzman to be extradited but justice officials warned that his lawyers were likely to ‘milk it’ by firing off different appeals at different stages of the extradition battle to prolong the legal tussle.

The Mystic River star said he did not turn El Chapo in because the drug lord’s trust ‘was not to be f***ed with’.

‘I take no pride in keeping secrets that may be perceived as protecting criminals, nor do I have any gloating arrogance at posing for selfies with unknowing security men. But I’m in my rhythm. Everything I say to everyone must be true,’ Penn wrote.

Penn and del Castillo are now under investigation in Mexico.

It would hardly be the first time the CIA had tapped a Hollywood worker for their connections to take a different approach in an international political case.

The actor met with the world’s most wanted drug lord in the jungle to ask him questions such as ‘do you dream?’ and ‘how would you define yourself?’

And then just hours after the Sinaloa cartel leader was detained by Mexican marines, the Rolling Stone published a lyrical 10,000-word account of their meeting.

Supposedly the entire ‘clandestine horror show’,  as Penn put it,  was part of a research project to develop a Netflix-style drama about Guzmán and his prison break.

Though Penn insists he went to extreme lengths to hide the meeting from authorities, the details have sparked widespread speculation that he was in fact tapped by the CIA to locate the fugitive criminal – just as screenwriters were enlisted to make Argo to free US hostages in Iran in 1979.

One thought on “Is Sean Penn A Spy? Questions Loom After Interview Leads To El Chapo’s Arrest”